The mitochondria and its encoded peptides are the foundation for the development of CohBar’s potential breakthrough therapeutics targeting chronic and age-related diseases with underlying mitochondrial dysfunction, such as NASH, obesity, cancer, fibrotic diseases, acute respiratory distress syndrome (ARDS), type 2 diabetes, and cardiovascular and neurodegenerative diseases.

Mitochondria are generally understood to be the powerhouses of our cells and responsible for converting nutrients into energy. Mitochondria evolved and originated by endosymbiosis when a bacterium was captured by a eukaryotic cell millions of years ago. They also have their own DNA that encodes hundreds of peptides (small proteins). The mitochondrial genome is 200,000 times smaller than the nuclear genome and is inherited maternally. 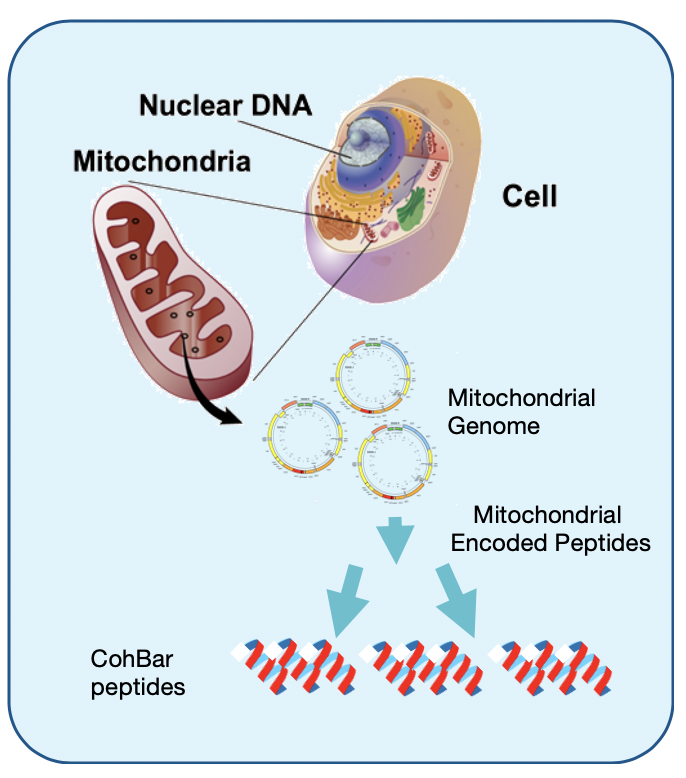 A much broader role for mitochondria: recent research reveals

A deeper understanding of mitochondrial dysfunction

Our founders' and CohBar’s scientists have discovered the existence of hundreds of new potential genes in the mitochondrial genome that encode peptides (small proteins), and identified the first mitochondrial derived peptide (MDP) associated with age related diseases in human centenarians and their offspring. Further studies have demonstrated metabolic regulation and protection, cytoprotection and anti-inflammatory affects in animal models across multiple age-related diseases.

Our internal discovery efforts have resulted in the identification of more than 100 previously unidentified naturally occurring peptides encoded within the mitochondrial genome, and generated more than 1,000 analogs. Many of these mitochondrial derived peptides (MDPs) and their analogs have demonstrated various degrees of biological activity in cell based and/or animal models relevant to a wide range of diseases, including NASH, obesity, cancer, fibrotic diseases and type 2 diabetes. Our research efforts focus on certain MDPs and their analogs that demonstrate the greatest therapeutic potential.

Our proprietary platform technology explores the mitochondrial genome for new peptides that exhibit biological activity, and optimizes their structures using cell-based and preclinical models, to develop novel therapeutics with the potential to treat a wide range of chronic and age-related diseases.

We have substantially expanded our pipeline in the past year. The breadth of our pipeline greatly strengthens our belief that there are potentially multiple novel therapeutics that can be developed from peptides encoded in the mitochondrial genome.